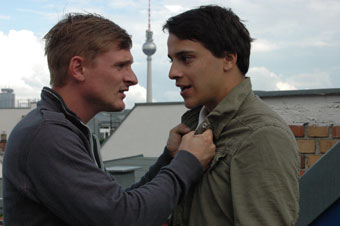 Berlin Mitte in the summer. For five days, two young men camp out on a rooftop terrace in the hopes of getting an exclusive view of the world’s most famous couple. One of the young men is Maik Tremper, a professional photographer with apartments in London and Monte Carlo. The other one is Momme Ulmer, a life guard and film projectionist on the North Friesian island Pellworm. Two worlds collide. In the closest of quarters, Maik and Momme have to make compromises between the commercial interests of the highly-paid photographer and dreams of a movie fan. Could this really be the beginning of a wonderful friendship?