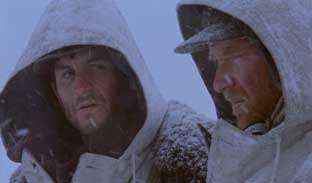 When Italy in October 1943 declares war on Germany, sections of the German 5th mountain division are stationed in the Austrian/ Italian border region of the Alps. Small groups secure a 260 km long frontline with bases at heights above 3000m, more or less cut off from supplies. The film centres around one such group where five men battle not just with the circumstances surrounding them but to an even greater degree with the relationships developing between them. Do the events justify the individuals to act as human beings and not as heroes and to bear the consequences? The film deals with the topic of humanity rather differently than is wont in this genre.