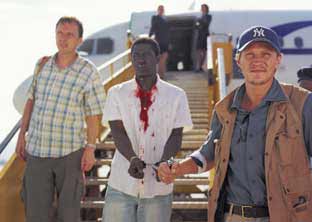 One dark night, Isaac, black and approximately 25 years old, illegally crosses the border into Austria. Very soon he’s the star of a small town’s football team, and just as quickly he has an Austrian girlfriend. By chance the Austrian police discover that Isaac’s British passport ist faked. Despite Isaac’s vehement denial, the authorities presume him to be a Ghanaian citizen and decide to deport him.

Two Austrian policemen, Rösler and Samhaber, are to take him by plane to Accra. Once there, however, everything goes wrong. Major Makebi, Director of Immigration in Accra, is convinced that Isaac’s deportation order is faked, and since the two Austrian policemen tried to deceive him, he confiscates their passports and forbids them to leave Accra until the matter’s settled …