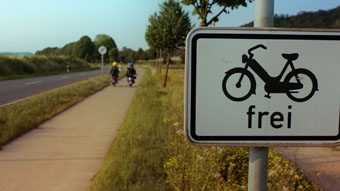 Im and Eric have a lot planned this summer. A lot more than they were ever able to do at the local fire department summer camp: one of them wants to hook up with a flirt in Hamburg, the other one wants to finally get his career as a drummer going!

With their tuned-up mopeds, a tent, beer and their inflated egos, the guys think they are ready to make a break for it. And just when it looks like a locked-up engine is going to ruin it all, their savior is waiting at the next bus station: And she’s wearing a green hoodie.