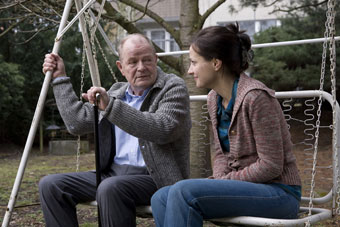 Thomas lives several hundred kilometers from his parents’ house in Dessau where he grew up. He lives his own life and has just started his own family. He only visits his parents and his sister Susanne as often as is necessary.

But then an urgent call orders him home. Their mother isn’t doing well. He packs his things, just enough for three days. But when he arrives, his mother has already died of a heart attack. There isn’t much time for mourning, the funeral has to be arranged. And most importantly, they now have to find a solution for their father. After suffering a stroke, he cannot live alone, but since he is mentally very fit, he certainly does not want to be sent to a home. So who is going to take care of him?

Will Susanne, as Thomas hopes, give up her own life and move back in with dad? Thomas and Susanne are speechless. On the one hand somewhat distraught, but on the other with angry pragmatism, they try to clarify issues which they have been suppressing and avoiding for years. After having lost touch with one another over the last few years, they now have to overcome their differences and join forces to face the problems at hand, together.