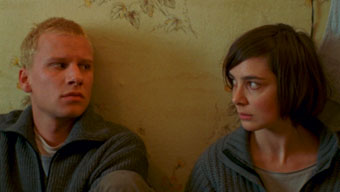 Jakob and Manu have developed their own specific survival strategies. Without a permanent home or steady job, they live in a self-made camp in the woods and use the municipal swimming pool when they need to shower.

Always short on cash, they make a living as providers of human services. They notice what is missing in other people’s lives and make a living by satisfying others’ desires and giving them, what they need or what they lack. It’s late summer and fall is just around the corner. Manu and Jakob are living in their makeshift camp in a forest, just until they have some more money again.

Manu takes care of old Mrs. Katz, who is grateful and pays for this service. Jakob is looking for a new “client”. At an airfield for glider planes, Jakob provokes an accident, which catches the pilot’s attention and awakens his sympathy. Martin, the pilot and a former manager, takes Jakob home and introduces him to his wife Claudia, who is initially not thrilled with the “visitor”. Little by little, Jakob succeeds in winning acceptance within the family. Jakob reminds Martin of his son Benjamin, who died a few years ago in an accident. Jakob makes himself available – in place of Benjamin. An open-ended offer, immediately terminable.

When Mrs. Katz suddenly dies, Manu is ready to move on, but Jakob decides to stay with Martin as he feels that the job is not yet finished for him. He increasingly feels at home and secure within the family. As Jakob takes on the role of the deceased son more and more and becomes estranged from Manu, she decides to pay Jakob and his new family a visit and win him back.