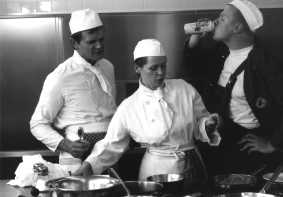 Lübbenau in the idyllic Spreewald, German capital of cucumbers, ten years after the fall of the wall. Jutta Störmer, formerly cook to the GDR’s political cadre and now worker in a cucumber factory, has a surprise visit from her first lover, Erik Bundschuh. In the 70‘s, when they both were students at the cooking academy, he walked out on her and escaped to the West. Now, 25 years later, he makes her an offer she can’t quite believe: Like in good old times he wants the two of them to cook for Potsdam’s “Dinner-Cup”, the most renowned culinary contest in Brandenberg …