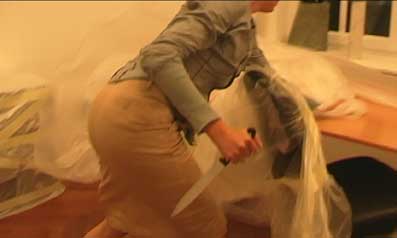 Klara starts a new life. A year after her husband’s fatal accident she and her daughter move to Vienna. She receives an anonymous videotape. Markus, her husband, seems to have led a double life for a long time. In the course of 24 hours, her suspicion is borne out. Klara is more or less the only person on the screen, sitting in a bare apartment flat , on the phone to her daughter or friends, trying out small gestures. But of course she’s never really alone – the camera is omnipresent.

VIER TÖCHTER24/7 THE PASSION OF LIFE