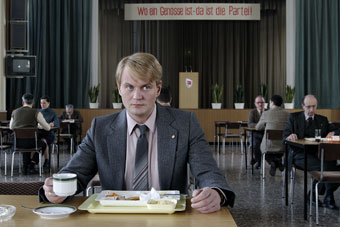 In 1984, Bettina is arrested due to suspected contacts with the West and brought before Stasi officer Jan for interrogation. For half a year, they meet more or less each day, and in these weeks and months, the unlikely thing happens: They fall in love. They communicate with few words and gestures and with the aid of a numerical code that Bettina invented: “11 means, you’re beautiful”, “12 means, I love you”. They’re always in danger of being found out.

Then they are separated. Bettina is convicted and sent to the prison Hoheneck before being deported to the West. By the demise of the GDR, Jan has risen to the rank of major. Years later, Bettina who works as a guide in the former Stasi prison that now is a memorial site, traces her former interrogator. He’s now married with a daughter and works as accountant in a logistics company. When the two meet, the unlikely thing happens again …