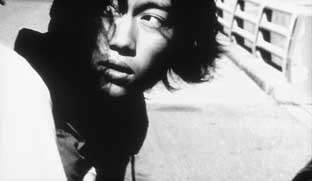 For no apparent reason, Usami, a young student, is forced by three men to take part in a trip to the sea which takes on the uneasy feeling of a family outing – a shopping spree, eating out, beach combing -, all in a threatening and tense atmosphere. The relationships that develop between Usami and each member of the strange group are diverse and intense, until the roles seem to shift.

The film deals with the “why?” precisely by not asking that question. In the end, the three young men split up from Usami as suddenly as they met. Life could continue as usual – but for Usami everything has changed.