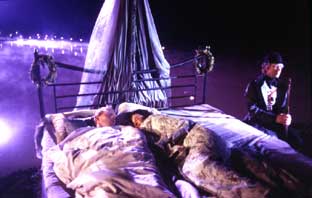 A small old town in Thuringia. The countdown for the new year has begun. Actually, Nina has been invited to Max’s with whom she’s been in love for a long time. But she’s decided to spend New Year’s Eve on her own – after all, Max is Sybille’s husband, and Sybille is her only friend. Still, love calls her irreverent family ghosts onto the scene – outsiders and lunatics who once followed their own stars, even if, by doing so, they perished. Their destinies have become local legends …