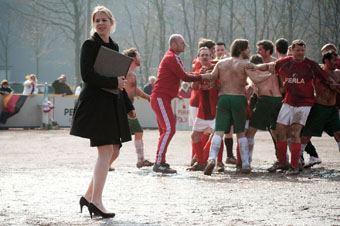 A city in the Ruhr. Karin works for the washing machine manufacturer PERLA in the HR department and is waiting for her big career opportunity. And she gets it, albeit unexpectedly and bitter: 400 people have to be laid off, otherwise the plant will have to close down. Order from U.S. headquarters. Karin is to assist Dr. Kruger, the man who is supposed to kick everyone out. With compensations and a transitional company, the workers are to be lured to leave of their own accord. Now Karin has her chance – and no choice: the plant has to be saved. But: should she really turn on her own colleagues? A glorious dilemma.

But that’s not all. She meets Mike. He works on the assembly line and plays in the company’s soccer team. To leave voluntarily?! To allow oneself to get laid off? Does the crisis give them the right to do absolutely everything?! Nope, that’s enough. Mike mobilizes the team to show headquarters and Karin’s corporate social responsibility the red card.

Karin and Mike – two different people, two different situations. But still, they fall in love with each other. Head over heels. Of course, they try to fight it. Karin sticks to Kruger who coaches her and conveys the feeling that her long-desired career jump is close at hand, and he also has eyes for Karin. But Karin’s heartstrings get caught up in the crossfire of the situations at hand.