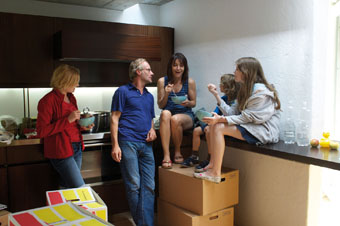 14-year-old Wanda and her family move from Berlin to Switzerland. The big house with the overgrown garden, the idyllic, pretty town – all seems very promising for the three children.

But the new beginning proves difficult for them all. Joachim, 40, jumps headlong into family activism. Anna, 40, tries to bond the family with new rituals but also goes back to working again. Their longing for an intact family and their desperate attempts to make things work soon re-open old wounds.

Wanda’s fight for her family brings her ever more into conflict with her own circle. Having difficulties at school and being rejected by her peers, she turns to sexual encounters with their strange neighbour, Hannes. After an altercation with him she seeks refuge among her family but is left all alone in an emotional vacuum.

Her sister, Miss Sophie, experiences the same while their little brother has drifted into his own private world.

Now the siblings need their parents more than ever, and Wanda decides to re-conquer her family. In a final attempt to keep things from falling apart, she tries to force her parents back to being lovers. But she has to realize that her parents can no longer do as they wish.