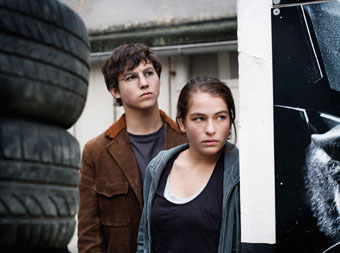 After his father’s suicide, 17-year-old Richard decides to live in a youth shelter rather than with his mother so that he can concentrate on getting his high-school diploma. Richard doesn’t want to get involved in anything and avoids all contact with the others. The only place he really feels comfortable with is the Internet’s virtual world, but exactly this virtual escape is not available at the shelter.

The place is home to a bizarre bunch of teenagers, and Richard wants to have nothing to do with any of them, if it weren’t for Kyra. Kyra is an outsider, like Richard, but completely different from him. Like Richard, she doesn’t reveal much of herself, but she is open, direct and spontaneous and follows her emotions – which often couldn’t be more contradictory. Not in the least bashful, Kyra befriends Richard, meddles in his affairs, and breaks down his barriers.

Richard tries to resist, but becomes more and more captivated by Kyra. He who’s afraid of intimacy falls in love with this girl who wants nothing but to escape – far, far away. Kyra wants to be free, above all from her past. But her past catches up with her: Leni, one of her former neighborhood friends, arrives in the shelter. A girl who is deeply hurt and whom Kyra takes under her wing, but she cannot protect her, just as she could not protect her mother. When tragedy strikes, Richard is Kyra’s only source of support.