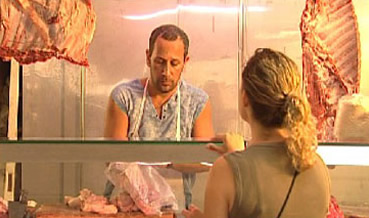 40-year-old Jorge Roni works in investments. He knows everything about the changing variabilities in the money market and about the difficulties his fellow humans experience. Apart from his wife, there are two other people who play important roles in Jorge’s life: Carlos, his childhood friend, and his beautiful lover who’s into a luxurious life.

One day, Jorge is unexpectedly summoned to court where the judge explains to him that a defendant, Roberto Ventura, has named his as a possible source of help. Roberto was another childhood friend of Jorge’s, but they haven’t met in years. Jorge offers to pay a good lawyer for him but the judge has another kind of help in mind – a large sum of money which will enable him to change the sentence he will have to pass within the next 60 days. On the one hand, Jorge is incensed about this invitation to bribery, on the other hand he feels duty-bound to help out his old friend.

A month later, at his birthday party, Carlos, who as a gambler has often asked Jorge for money without ever paying it back, tells him he’s in dire straits: He owes a pawnbroker known for his proclivity to violence a large sum of money. But Jorge refuses to help his friend, not least because he just doesn’t have that kind of cash. A few days later, Carlos tells him about a dream he allegedly had in which a man came to riches by a fake robbery. Inspired by this dream, Jorge summons the courage to make a plan that will have unexpected consequences …