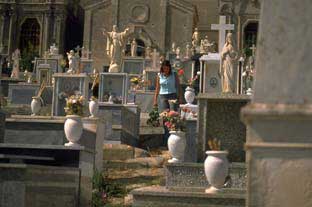 Noto lies on the northeastern coast of Sicily. Founded in 1693 less than 500km off the North African mainland, the town is called the capital of Sicilian baroque. In 1996, the dome of the famous cathedral St Francesco collapsed. Ever since the symbol of the town’s identity has been destroyed, the inhabitants have been becoming nervous, especially the young who meet up every evening on the steps leading up to the cathedral. They want the old town to put itself onto the map of the modern world, to be linked up with the global network of digital money transfer. The local confectioner “Café Sicilia” plans to distribute its products via internet to Tokyo and Manhattan.

The film tells a story of a farewell to old Europe. It’s the story of a group of young people on the steps of Noto, a group who have known each other since childhood and who are interconnected by family, friendship or love. And it’s a group that’s destined to break apart: Some will leave for the new world and its big cities in the north, others will stay in the old baroque and oriental town.

TO TULSA AND BACKDIE CHINESISCHEN SCHUHE