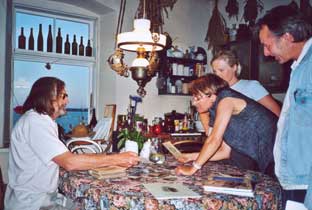 „Come with me, I’ll show you my summer country! Do you even know where Estonia is? Bang in the middle of life!” That’s what the big brother said to his little sister. You have to love people at the right moment! One gasp is enough to cut us off from every past and every future. Like the night in July 1996 when at 2 a.m. the phone rang and Interpol conveyed the news of the brother’s death. A wrong cause of death is given, the circumstances are bizarre and uncertain. An accident or a crime? For the sister, a new era begins! Years ago he had left for the Baltic in search of his roots, finding his paradise in a fishing village in northeastern Estonia. Where he also met with his death.

Seven years later, a fascinating journey following in the brother’s steps take her into a fantastic world – a national park on the coast between Tallin und Narva with its extraordinary people the brother fell in love with …