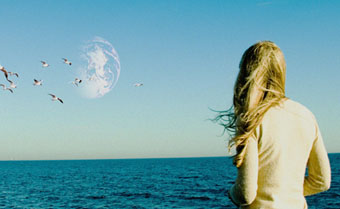 The film tells the story of Rhoda Williams, a highly gifted young woman who is trying to amend a horrible tragedy. She lives in a world just like ours. But then, over night and completely unexpectedly, a duplicate planet appears on the horizon, one which is provisionally given the name Earth 2.

For Rhoda, this mysterious planet with its parallel reality, one which scientists presume exist, is her last hope. A tragic accident destroyed her dreams of becoming an astrophysicist. She’s lost all hope for the future, the only thing that keeps her alive is her desire to redress the past.

One day she stands in front of the door of renowned composer John Burroughs, the very man whose life she has changed forever. Both are completely uprooted, wary and full of doubt about who they really are. They fall in love and begin a highly unusual relationship. When Rhoda gets the chance to travel to Earth 2, the hidden truth between them is revealed and an elementary question arises: What if we are in fact the great enigma of the universe? What if we exist in duplicate out there somewhere?