ANVIL – THE STORY OF ANVIL 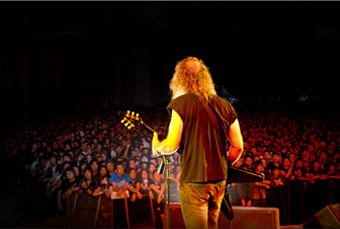 At 14, Toronto school friends Steve “Lips” Kudlow and Robb Reiner made a pact to rock together forever. Their band Anvil went on to become the “demi-gods of Canadian metal,” releasing one of the heaviest albums in metal history, 1982’s “Metal on Metal.” The album influenced a musical generation including Metallica, Slayer, and Anthrax. All those bands went on to sell millions of records but Anvil’s career would take a different path – straight into obscurity.

But Lips and Robb never gave up on their childhood dream and kept rocking, always believing that one day Anvil would taste the success that had so long eluded them. The film follows Lips and Robb, now in their 50s, as they gear up to record their thirteenth album, “This is Thirteen.” Coping with increasingly impatient families, crippling mortgages and the effects of old age, they know this is their last chance to really make it.

To prepare for the album, the band heads to Europe on their biggest tour in twenty years. Even by Anvil standards it is a spectacular string of disasters.