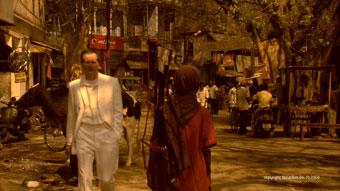 Winnetou dies in the arms of his blood brother Old Shatterhand. In Cinemascope, on the screen of a small village cinema in Carinthia. In the audience, a small boy, the adolescent Josef W., follows the action with big eyes, mesmerized. Reverse angle and break: “The cinemascreen walker” appears. The “Poet of the Calves’ Tether”, the successful author Josef Winkler, descends from the screen and looks – with a mischievous smile – at his child Alter Ego.