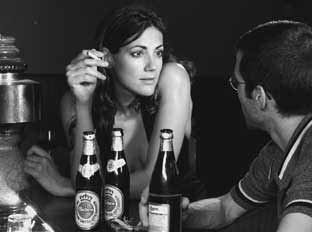 „The poet Rufus Landwehr passed away at the age of 33. We know little about his life – apart from the fact that his small œuvre is characterized by self-hate and nihilism …”

Rufus’ obituary grows fuzzy in his head, he tears the empty sheet out of his typewriter and throws it onto the pile of white, empty sheets behind him. Rufus’ world is grey and pointless, his poetry has died until the day charming Helena turns up out of the blue, takes him by his hand and leads him to a place far beyond his imagination. “… after marrying Wilma M., Landwehr’s talent evaporates. He died aged 78 in the circle of his family …”