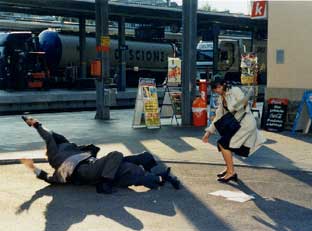 Alex, a professional tourist guide, is asked to welcome Sacha,a young woman of Russian extraction who participated in a contest winning a week’s stay in Geneva. From the oustset, the young woman shakes up Alex’ plans and drags him along with her through a risky and hazardous treasure-hunt at the confines of Eastern Switzerland.

Wanted by the police and hunted down by the mafia, Alex and Sacha decide to shake off their pursuers by moving about more slowly than they do, taking routes across lakes and other roundabout ways. While Alex and Sacha sink deeply into an ever stranger Switzerland, they observe, discover, oppose and finally come love each other – to oblivion.