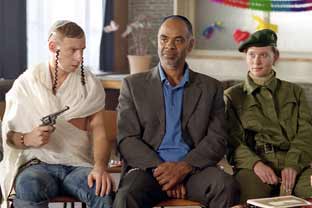 Karl would have been better off had he not moved back in with his elderly mother, Marianne. But she’s poorly, desperately wants him around but can’t accept him as a grown-up: Coming home late is bad, not eating her favourite soup verges on a disaster … Karl’s job as a physiotherapist is not only exhausting but also badly paid.

One day, irresistible Jael turns up in Karl’s practice and surprises the unobstrusive young man with an invitation. Karl senses that the attractive stranger wants something from him. But to his disappointment, it’s not himself she’s interested in but her ambitious goal as a entrepreneur to create a building complex for a Jewish centre in town …