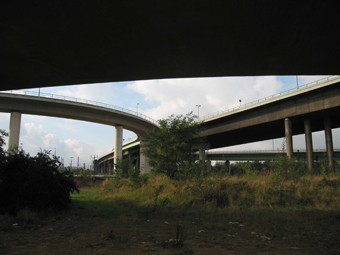 The Garden of Eden, a place which at first seemed fertile, but proved to be unfertile. Later, Eden stood for the uncultivated steppe and, in general, for the hinterland beyond the urban centers: the periphery.

The film takes us on a journey into urban peripheries, a world that is almost unknown to most, despite the fact that is right before our very eyes. Consider the late-afternoon drives to Ikea: places where there is almost nothing of great significance.

This is where the film takes us, as though on one of these drives, we stop on the side of the road, climb over the guard railing and wander through the wild bush: the empty spaces on a mental map. And there, in the supposed no man’s land, between highways, industrial areas, fallow land, quarry ponds and abandoned railway tracks, we find a group of people who have made this place their own. Archipelagos in these almost nonexistent places on the outskirts of the city. Urban open spaces for desires and unusual plans.