BABAMIN SESI – VOICE OF MY FATHER 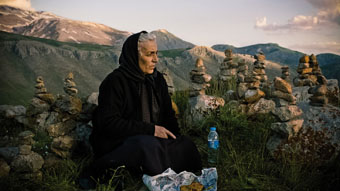 Alone and left to her own devices, Basê raised the kids, took care of her in-laws and managed the house. Her husband Mustafa had to leave the country early on and died many years ago, far away from home. Now, as an old woman, Basê feels even more alone, for Hasan, her older son, joined the Kurdish underground. And now her younger son Mehmet is leaving home.

While packing his things, Mehmet finds some cassettes that he, his mother and his brother recorded for his father a long time ago. Back then, that was the only way to stay in touch. There were no telephones, the children were too young to read and write and their mother was illiterate. He comes to the painful realization that he never actually knew his own father. The only way to find out more about him is by listening to the old cassettes of which he knows there must be more. But Basê claims they don’t exist. The more and longer he insists on knowing where the cassettes are, the more he finds out about his hesitant mother and his family’s past. Slowly but surely he starts to realize what Basê must have been going through all those years, why she suppressed everything that reminds her of her husband – his father.