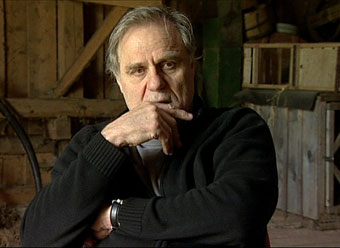 Josef Bierbichler is one of Germany’s greatest stars of stage and screen. Having come to fame in the Seventies through his work with Herbert Achternbusch, both on stage and in films (ELLA, SERVUS BAYERN), he has since been chosen “Actor of the Year” three times and awarded the Gertrud Eysoldt Ring. This year he received the German Film Award for playing the lead role in the feature film WINTERREISE. He plays on all major German-language stages, in Zurich, at the Burg Theatre in Vienna, the Volksbühne in Berlin and the Schaubühne.

Ever since he was born in 1948, Josef Bierbichler has lived in Ambach on Lake Starnberg in the house of his birth, the inn “Zum Fischmeister”. This film follows him for a period of roughly two years, a time in which changes are in the air. Birbichler no longer wants to be an actor who stands on stage and declaims words written by an author in a production staged by a director. He is looking for new artistic paths to follow and would like to break up the hierarchical structures of the theatre business.