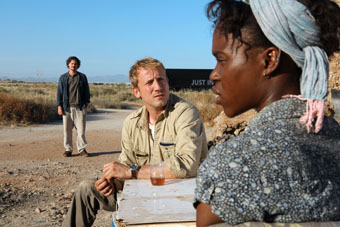 With his paraplegic partner Jimmy, the 35-year-old trucker Don Petro runs a small shipping company called “Just in Time”, which specializes in produce shipping. Over the years, they have developed a clever system of smuggling illegal refugees from Africa among the tons of tomatoes and garlic shipped to Europe.

Jackie, a young Nigerian woman, flees with her son across the Sahara Desert toward the north. Their goal is Geneva, where the boy’s father, a Swiss UN officer, lives. He should at least take on the responsibility of providing the boy with a proper education.

Don Pedro, Jackie and Emanuel meet at the African-European border. With confident routine and a bag full of tricks, Don Pedro successfully smuggles the two to Europe, and falls in love with the beautiful Jackie in the meantime. But the longer the escape takes, the more difficult Don Pedro’s problems become.