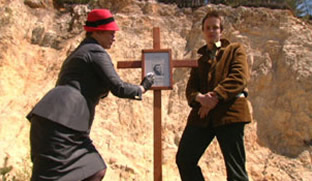 Vienna, 2021. Europe is divided in American sectors. The Euro has been replaced by the dollar. Johnny Bush (son of Georg Bush, the American peace chancellor) is Chancellor of Austria. English has become the official language, dialects are forbidden. The people of Vienna meet underground (with the dinosaurs) to keep their local dialect alive. The German journalist August Maria Kaiser arrives in Vienna for research on Jörg Haider, who has gone missing. Haider had governed Austria for 20 years and was driven from office by the Americans. In his search to find out the truth about Haider, Kaiser meets a number of people he knows.