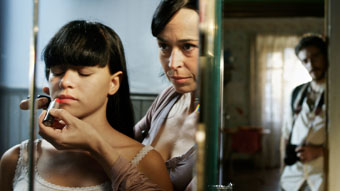 Ane, 13 years old, has lost her sight. While her parents are busy having her operated on time and time again, she enters puberty and starts questioning things: “What does it mean not to be handicapped?” “Will anyone fancy me anyway?”

As they spend their holidays in the family house in a coastal village, Antonio, her father’s cousin, bursts in like a gust of fresh air. He is an enigmatic photographer who has traveled the world. For Ane, it is the summer of first love. With Antonio, she discovers photography. With a camera in hand, like a detective and to the chagrin of her mother, she captures their daily life until she comes upon something no one wants to see or acknowledge … Rather than see herself as a victim, Ane fights to forge her own path in life.