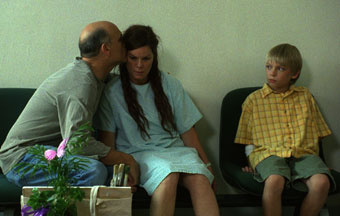 Ten-year old Chris lives in a blue-collar beach town where he often can be found fishing at the water’s edge. His uncommunicative father, John, works in construction, while his mother, Mary, who suffers from schizophrenia, paints her dreams onto canvas. Chris attempts to conceal his mother’s illness, but her bizarre public behaviour makes life difficult for him, also in relationship to his father. When Mary’s illness leads her to violence, John has no choice but to hospitalize the woman he loves. To cope with the situation, he immerses himself in building a large sailboat. His dream is to take Mary sailing again, in the boat he promised her years ago, and so he never realizes how lonely and lost Chris feels. Only when several dramataic events leads to a pivotal confrontation between John and Chris do they slowly get a better understanding of each other’s hopes, fears and dreams …