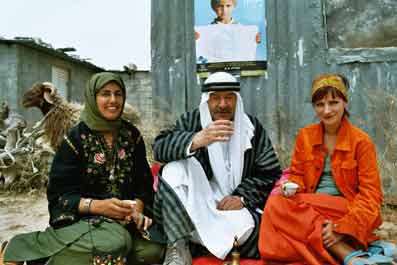 While studying at the film school in Beer Sheva, a young Russian woman immigrant to Israel and a young female Bedouin meet and become friends, despite religious and political barriers. They’re constantly out and about with their Digi-Cam, working on their joint degree film. Invariably, they get drawn more and more into the images of their own histories. With their different outlooks on life that couldn’t be more at odds, the women friends demonstrate in the Israeli desert Negev, in Beer Sheva and the West Bank, in Rahat and at the Dead Sea that conflicts can be solved on a different plane altogether.