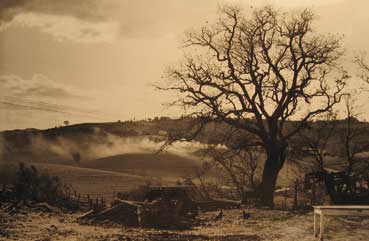 “Che si racconta …“, “Who knows?”, is Mauro Bianchini’s reply when I ask him when he was born. As a 65-year-old bachelor, he’s been living with his brothers, Alvaro and Emo, and their wives, Anna and Antonietta, on Falsettaio, a large farm in Tuscany, since 1952. I get to know the families in 1989 and we soon become friends. I’m fascinated by their more or less self-sufficient way of life in all its unspoilt simplicity.

As the years go by, the three brothers and their families till the soil, grow crops, breed pigs and cows, plant and cultivate olive trees and make their own wine. But soon I notice that even here, where I’d never thought it possible, more and more things are changing. Bit by bit, the pigs and cows are sold off, the brothers’ sons all find work elsewhere, the house and the fields are split up. Who knows how much longer Mauro, Alvara, and Emo will be able to run the farm?

The film traces moments throughout the seasons and shows a way of life and work that is ever more rare to find.