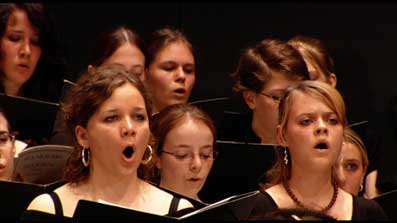 The one world: Six weeks before end of term, the choir of the higher grades at a Steiner high school in the Zurich Oberland start rehearsing Mozart’s Requiem, directed by Thomas Gmelin. For the hundert young singers, the wonderful work opens up a world they hardly know from their everyday lives. The rehearsals are all but easy-ging. Honing the musical expression is hard work, as is struggling for a discipline where the interests of the individual are forced to take a backseat for the benefit of the collective. The other world: Rebecca, Wanja and Stefan from the final grade, modern kids who grew up with iPods and skateboards.

The film documents not just the choir rehearsals, but also their daily lives at school, at home, while presenting their finals and saying farewell to the school. They talk about their anxieties, their hopes and plans for the future, about guardian angels, love and death without any restraint. In the evening of the last school day, the performance of the Requiem takes place …