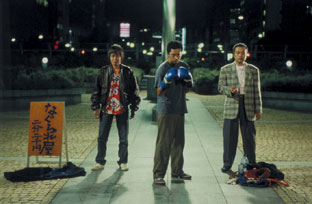 Every evening, three down-and-out friends meet up at a snack stand trying to pick up girls – and invariably get snubbed. What they’re doing in life has never been clear to them, but that doesn’t stop them – each in his own way – believing that there’s a point in life. Twenty-something Iwano dreams of becoming a boxing champion but lacks initiative. So he offers himself as “human punching bag” to stressed-out businessmen.

Thirty-something Manu sells hats in the faltering family business. One day he decides to start selling hairpieces to balding men and discovers not only his talent as a comedian but also himself. Fifty-something Sada is a complete social drop-out. He’s fixing up an old boat to fulfill his dream of sailing around the world. He doesn’t reflect much on what life is all about, but there is more to him than meets the eye. A heartbreaking secret he can’t even share with his best friends.