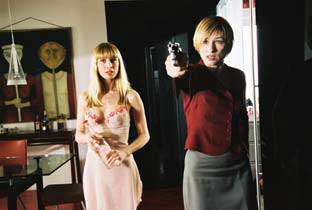 Gangster Oskar Boroschnin, recently released from prison, has one last job to do before dedicating himself to his true passion, cooking. His intention is to fulfill his dreams and run his own restaurant with his lover and former therapist, Maria. With the aid of Diana, who works as an editor, he also wants to publish his book promisingly entitled „Secrets“.

Mafia boss Konstantin finds Oskar‘s plans hard to swallow, especially since he badly wants to get rid of bar owner Leo. His mafia colleagues Valentin and Belmondo help him map out the murder. It’s a potent mix. Konstantin finds out about the mysterious manuscript, Valentin sautees Diana, and policeman Novak and his dumb assistant Klein stick to Oskar like over-done pasta. The delicious showdown is eventually served in the restaurant run by Oskar‘s long-standing friend, Paul.