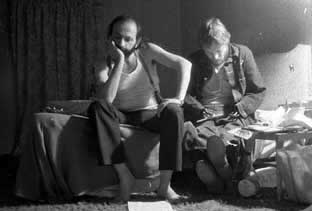 DAN’S MOTEL is a trilogy of mood pieces, with prologue, that situates the viewer at a lonely motel by the sea. The motel acts as a last refuge for disintegrating lives. Part One, “The Conduit,” is the yarn of a gangster-poet who has ‘holed-up’ at the motel. His only contact with the outside world is a cripple who brings him supplies and provides him with lady companions. Part Two, “Kathleen,” is the story of a woman who has never committed herself to anything until the day she checks into the motel to commit suicide. Part Three, “The Advantage,” is the tale of a country singer and composer who plays hard and lives fast, but finds success eluding her.