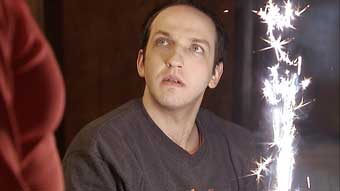 Georg is a writer, hoping for his big breakthough. When he encounters the unemployed Alois, he sees in him just the right material that he has so desperately been searching for. For Alois has the strange and senseless habit of entrapping people in the most absurd of situations. Georg decides to get to the bottom of Alois’ behavior and, as a result, gets so tangled up in the most bizarre, embarrassing and even dangerous situations that he himself is soon in over his head.