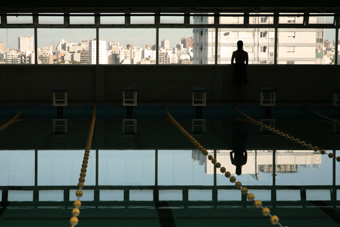 During a stopover on her way to Chile, the 31-year-old swimmer Maria recognizes a foreign nursery rhyme in Buenos Aires. Maria doesn’t speak a word of Spanish, but without understanding, she remembers the Spanish lyrics and melody. Disturbed and thrown off course, she breaks off her journey and wanders through the unfamiliar city.

While she is searching for an explanation, her father suddenly turns up in Argentina. He confesses the truth about her family background. At the end of the 1970s, Maria spent the first three years of her life in Buenos Aires. When her biological parents disappeared as victims of the military dictatorship, Maria was adopted by Anton and his wife and brought to Germany.

But after his confession, the trust between father and daughter is threatening to disintegrate due to the years of lies. A common future doesn’t seem possible anymore. While Anton wants to return to Germany as soon as possible to leave the past in the past, Maria wants to stay in Buenos Aires and look for her Argentinean family. The disempowered father fights for his daughter’s love, the uprooted daughter fights for the truth of her real identity.