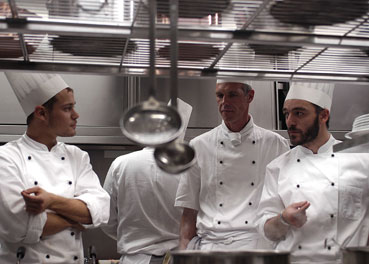 For years, the two chefs Don and Santano have been braving life as a two-some. As a cook, Don is a genius, but otherwise hopelessly chaotic. He works in Santano’s shadow who, as head chef, shows more responsibility than he does. Ever since he experienced the magic taste of his “La Zoupa”, he is trying to discover the correct recipe for this fantastic soup which he made to perfection just once. Both his job and his love for his girlfriend, Jules, are suffering from his obsession.

Following a minor accident, one day Santano has to leave Don in charge of the kitchen. For Don, the evening turns into the opportunity of his lifetime when a restaurant critic shows up in their restaurant. However, Jules is also among the guests that evening and he wants to serve her an unforgettable birthday dinner – his last attempt to salvage their relationship. Don has to decide between his love and his passion. And then there’s also the secret of “La Zoupa” to be solved.