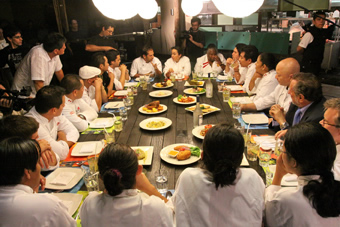 Can an entire nation be represented by its cuisine? The film journeys to the kitchens of Peru’s coast, highlands and jungle, as well as to Peruvian expat communities in Paris, London, Amsterdam and New York, looking for answers. From the most humble family kitchens to posh restaurants, from stories of pioneering Peruvian chefs abroad to those who preserve ancient recipes at home, we find that Peru’s cuisine has a deliciously integrating effect on its people, a people who have historically been marked by ethnic and economic differences.

Renowned chefs such as Gastón Acurio, Ferran Adrià, Juan Mari Arzak and Bernardo Roca Rey share their views on Peru’s cuisine alongside those unsung chefs who also dream of Peru’s cuisine as a motor of development.