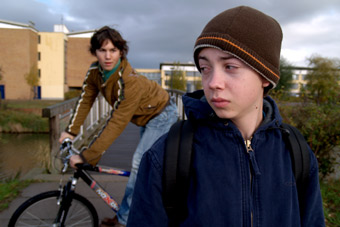 The Morells and Wagners, both families consisting of father, mother and son, live in a Hamburg suburb. Both are perfectly normal families, even at second sight. The fathers have been friends for years and work in the same company as salesmen for Swedish pre-fabricated houses. The adults meet regularly for a game of cards, rounding off the image of harmony and order.

However, the parents are unaware of the brutal and despairing animosity raging between their adolescent sons. Robert, the younger and also smaller of the two, is repeatedly fleeced by Paul. One day, he finds himself cornered by his sadistic tormentor to the extent that he shoots him dead. When the parents have buried their neighbours’ son and do their utmost to cover up the crime, an ever more desperate and drastic tragedy begins.