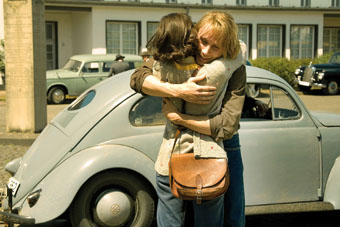 Sulamit, the daughter of German-Jewish emigrants from Germany, grows up in the 50s in Buenos Aires. Here Jews and Nazis live in direct vicinity to one another; after fleeing from Europe they have been thrown together once more in a strange country.

As a young girl, Sulamit meets Friedrich, a young German living across the street, and a strong bond develops between them. When Friedrich realizes that his father was an SS Lieutenant Colonel in Nazi Germany, he breaks off all contact with his family and goes to Germany. He takes an active part in the German student protest movement. A few years later Sulamit follows him, but she soon realizes that his political commitment leaves little room for a love interest in his life.

Sulamit goes to university, gets her degree and works as a translator. She starts a relationship with the University assistant Michael who loves her and tries to help her. But her heart still belongs to Friedrich. When Friedrich leaves Germany to join the Argentinian guerilla movement, he cuts off all contact and disappears without a trace. Sulamit takes off on a journey which leads her into the heart of Patagonia.