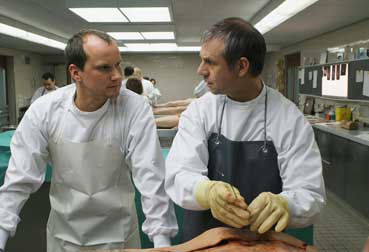 50-year old Gottfried Binder works as assistant pathologist at Zurich University Hospital and leads a decent citizen’s leisurely life. Shortly before his retirement he is told that he has a lung tumour and just a few months to live. Of all people, this diagnosis is made by Binder’s vicious boss, Dr. Götze, against whom he has long been bearing a grudge. He is to die while Götze is allowed to go on living?

Posessed by the idea of restoring some kind of justice, he kills the doctor and hides his body in a car boot – unaware that the car in question belongs to the hospital director, Professor Bernbeck, who believes that, after a night on the tiles followed by a complete blackout, it was him who committed the murder. A confused vying for alibis, suspects and motives begins which forces detective Howald to make a difficult decision.