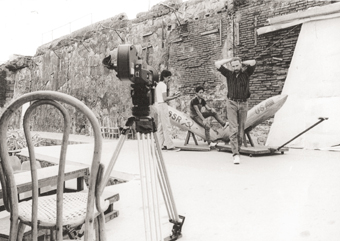 Filmed in the Philippines in 1983. Statement from Werner Schroeter from 1983:

“The MIFF, the International Film Festival of Manila, was founded in 1982 by Madame Imelda Romualdez Marcos, First Lady of the Philippines, Governor of Metropolitan Manila, Minister of Human Settlements, etc.

The political system of the Philippines turns out to be a dictatorship in the guise of a Republic. For the longest time, there has been so much criticism toward this country by public institutions like Amnesty International, the Human Rights League and others that it would be impossible to simply ignore it all. Mrs. Marcos’ founding of the festival can be seen as a political, propagandistic utilization of this prestigious enterprise. The festival is a showcase of state charitableness, liberal friendliness and an elegant denial of reality. […] The great cultural nations of the world have apparently unanimously accepted the status of the festival in the totalitarian state.

How difficult must it have been for Mrs. Marcos to evacuate 80,000 slum inhabitants, to plan the site and to build up the festival center (colloquially, it is known as “the morgue” because 136 of the 12,000 workers who worked in 24-hour shifts suffocated in fast-setting cement) on the ruins of the shanties? I’m not making a film about the festival, but at best one about the possibilities and reasons why it takes place. In 1983 I was invited with a film to the festival and came back with a new film. The most important thing is not the festival itself, but the historical and human space which it occupied. Like a tumor in a bottleneck. […]

I see a different country, one that is foreign and hardly known to me, and do not want to measure it by the same standards of my own history. I don’t approach a new culture crawling on my knees like the Filipinos were compelled to do toward the powerful Catholic religion during the time of the Portuguese-Spanish invasion. I don’t have to admire the current government of the Philippines nor do I have to condemn it, it has no effect on me. I can maintain my open perspective and observe history, conditions, dreams and the future in its own relativity.

Mabuhay (Welcome) It is not for this world that we’ve worked, fought, screamed out in horror, hunger, necessity, hate, defamation and disgust…”
Werner Schroeter