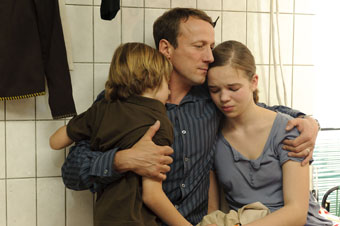 It’s the last time they’ll hear Sybille’s voice, but Lars Langhoff and the two children Maike and Piet aren’t aware of that. For them, it’s just another everyday telephone call. And so 12-year-old Maike reacts in typical defiant teenager fashion when her mother calls, and Lars and six-year-old Piet, too, aren’t really paying attention while they are talking to Sybille. Later they will feel guilty, but they won’t be able to reverse what happened.

Sybille Langhoff has committed suicide. She could no longer fight her desire to die, she says in her suicide note. Lars and the children are paralyzed. But life has to go on: school, work, the household, all the mundane things in life. Mourning, self-reproach, but also anger toward Sybille shake up the emotional situation to a mix no-one was prepared for. For Lars and the children, life will never be the same again. Because Sybille no longer wanted to live it. But life still has to go on …