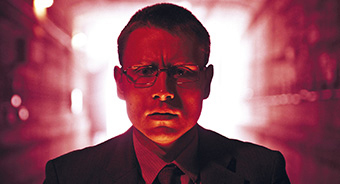 When his predecessor surprisingly quits, the young and reserved accountant Adrian all of a sudden is promoted. He takes over the annual audit of a private investment bank. But his initial joy at having been promoted doesn’t last very long. The businesswoman Rebecca enlightens him about the bank’s dark secret: the accounting books have been manipulated and the bank’s finances are at rock bottom. Adrian realizes he only got the job because he is considered weak and impressionable.

But Adrian puts up a fight: to prove the manipulation, he transcends the borders of legality and gets hold of documents that were kept secret from him. But Adrian runs straight into a trap. He was used – just like his predecessor. The more Adrian finds out about him, the clearer it becomes that his destiny is the same as his colleague’s: unwittingly, he falls in love with the same woman, buys the same clothes and gets caught up in the same web of balance sheet manipulation and insider trading that cost his predecessor his life. Adrian realizes that from now on he has to do things differently – better – in order to survive…