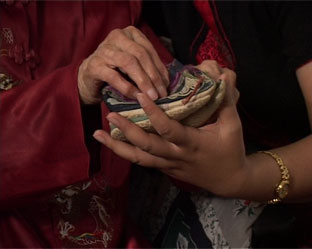 A journey of discovery that takes us into China’s past and present. Starting off with a story from the past – the filmmaker’s grandparents’ sojourn – we catch a glimpse of China today. We travel up the Yangtze, passing the “Three Gorges” all the way to the cities of Sichuan. Filmed a few weeks before the Three Gorges were flooded, the author saw signs of a vast upheaval. Everything’s on the move, not just the riverscape floating by. Ancient cities are being destroyed, new ones being built, the world’s largest dam is more or less completed. A river will disappear, more than a million people are being resettled – the new economy takes its toll.

Nothing will remain as it is. Even the landscape of the “Three Gorges” that we see in film and that the grandparents still knew will very soon belong to the past.