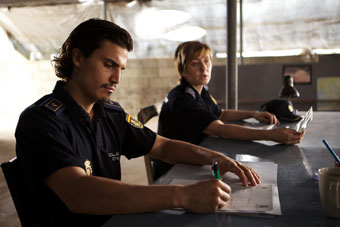 Canary Island cop José has become callous and cynical. As a border patrolman, he has to decide the fate of hundreds of African boat people that wash ashore on the Spanish island paradise. When German tourist Nathalie witnesses the arrival of a boatload of refugees and starts helping out on the spot, the lives of José, Nathalie and Congolese Zola, one of the few survivors with his son Mamadou, become fatefully intertwined.

Despite her husband Paul’s objections, Nathalie helps Zola try to escape from internment camp. But instead of freedom, he finds himself in the hands of criminal smugglers. When José blames himself for the death of his drug-addicted sister Marielle on New Year’s Eve, and Nathalie gets ever more deeply involved in Zola’s fate, José is forced to rethink his attitude. It’s up to him to decide. But to free someone, you may have to free yourself first.