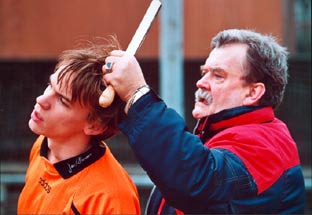 Life is nothing but horrid for sensitive 17-year-old Rudi Esser. Ever since he can remember his father – president of the fifth-rate soccer club Altona 03 – wants to turn him into a brilliant goalkeeper. With little success. Rudi is interested in other things. While his father and the club are preparing for the most important match in the history of Altona 03, Rudi wonders what it feels like wearing women clothes.