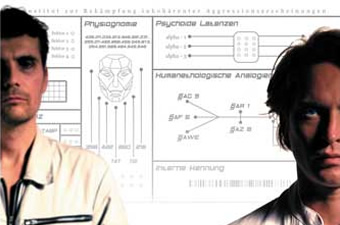 A clash of two ideologies in a societal dystopia in which man is in control of everything. All land on the planet as been built upon, food is grown in underground greenhouses. Man controls himself with pills and hormones. But aggression, man’s only natural emotion left, still finds its way to the outside. Dr. Bennet interrogates Erik Halber shortly after his deadly attack on another person. The “victim”, however, is Dr. Bennet’s own creation: the android AD-4 which is used to intercept and apprehend rising aggression …